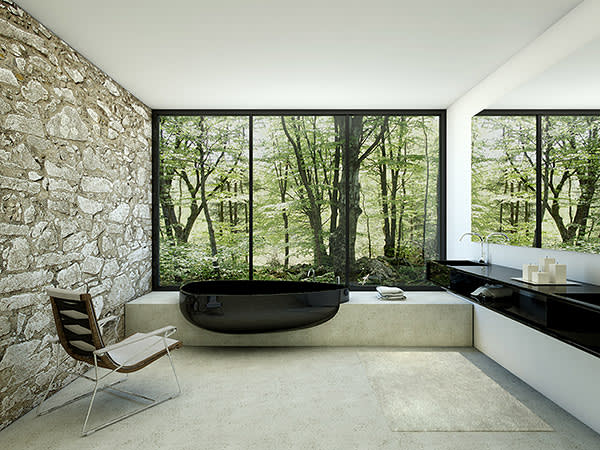 Beyond Bath, by Danelon Meroni

From a simple tin tub in front of the fire to a sculptural hammock made of carbon fibre that appears to float in mid-air, the once-humble bathtub now comes in many shapes and sizes. This might be worth taking note of, since these days a well-decorated bathroom can add thousands of pounds to the value of your home, with developers and designers spending more time and money on this room than ever before.

Rachel Martin, of bathroom specialist CP Hart, says more homeowners are now deciding to make a statement with their bathroom. “It has become a place of glamour and many people are really happy to invest, spending at least £15,000,” she says, representing an increase of about 200 per cent in the last few years.

But bathing has not always been held in such high esteem, even by the great and the good. Louis XIV of France was reported to have bathed only twice in his lifetime and “stunk like a wild animal”. By contrast Queen Elizabeth I of England was considered a paragon of cleanliness as she insisted on bathing once a month. Her father, Henry VIII, had installed plumbing at Hampton Court so he could bathe, but then added musk of civet to the water which may have negated the effect somewhat. S

o it was left to the most famous English dandy of his day, Beau Brummell (1778-1840), to lead the way. Considered by many to be responsible for the modern habit of daily bathing, he wrote a pamphlet on the subject, which advocated the use of hot water (then uncommon) and using no perfumes and powders afterwards.

Brummell even installed a hot-water tank in his house, which was beyond the means of most people but during the housing boom of the 1860s the middle classes began to equip their homes with bathrooms.

“The working classes couldn’t afford to install bathrooms so they used a tin tub in front of the fire, and the upper classes had no need to as they relied on servants to carry hot water upstairs; so it was a uniquely middle-class movement,” says architectural historian Ellen Leslie.

Victorian baths were the classic freestanding rolltops, made from cast iron and often standing on four claw feet, which have now come back into fashion and cost about £1,000. In the 1880s and 1890s, householders needed to apply for permission to install a bath as to do so meant the house needed to be connected to the main drainage system.

It was not until the interwar years of the 20th century that the fitted bathroom became a regular feature, and even then the 1951 census found that only 37 per cent of homes had an inside bathroom, while just 22 per cent had a hot tap.

Coloured suites came into fashion during the 1930s when bathroom manufacturers Twyfords introduced a primrose and jade range. Other shades were introduced each decade, including brown, peach, turquoise and, memorably, avocado in the 1970s. The “hotel bathroom” arrived in the 1980s and quickly became a byword for bathing excellence. Made from materials such as granite and marble previously unheard of in a domestic bathroom, the sleek new baths – often black and white and fitted with shiny chrome taps – made the coloured suite look indelibly naff.

In recent years, manufacturers have experimented with a return to colour. Spanish company Roca has recently introduced red and blue lavatory seats and matching vanity units but has steered clear of coloured baths.

Sarah Holey, of the Swiss bathroom specialists Laufen, says her company has recently added black and warm greys to its range but says it will remain only an accent colour for the time being. “There is definitely more colour in bathrooms but it tends to be on a tap or shower head rather than the bath itself,” she says.

Justin Homewood recalls how, in 1988, he struggled to raise the finance to launch his high-end bathroom store in west London, the Water Monopoly, because so few people were interested. “I managed it in the end,” he says, “but then I went to the glossy magazines for promotion and was told in withering tones: ‘We don’t talk about the bathroom’.”

“If a property doesn’t come with the required volume of bathrooms, you need to highlight to prospective buyers where and how to add them,” says William Duckworth-Chad of Savills. “Families now like each bedroom to come with its own – the addition of a good en suite bathroom to a London home valued around £1.5m can be up to five per cent,” he adds. “Our expectations today compared with just ten years ago are unrecognisable.”

The amount that people are prepared to spend on a bath is also unrecognisable, with prices ranging from £1,000 for a fairly standard model, to 10 times that for a bespoke piece made from high-spec materials or sculpted into an unusual shape.

World-renowned designers who have brought glamour to the humble tub include Philippe Starck, Marcel Wanders and Jaime Hayon, who created the rectangular Organico bath.

“The bathroom landscape has changed more in the last two years than in the past two decades, with tricks including colour, texture and pattern,” says Ian Monk, chief executive of Bathrooms.com. “Creating a bathroom is as much about creating a mood as a look these days and the fact that these spaces are intended for washing has become almost incidental.”

One manufacturer who is pushing the decorative aspect is Robert Grace, who specialises in creating jewelled and mosaic baths. The Harlequin, for example, features a chequerboard of 15,000 hand-cut and hand-painted glass pieces, and is encased in 18-carat white gold. It is on sale for £18,000.

So what next for the bath? Justin Homewood says the future is bright. “It’s time to move on from limestone and chrome and think about being funky and luxurious at the same time,” he says.

Indeed, Rachel Martin says that at trade shows she has attended recently she has seen baths with built-in storage for books and even bottles of champagne. The evolution of the bathtub, it seems, is not over yet.